Coins on a Headstone Hold Special Meaning. Here’s Why.

Have you ever seen coins on a headstone? Leaving signs of remembrance on graves is a long-held tradition.

While flowers are the most common grave decoration, they aren’t the only way to pay tribute to those who passed. Cultures and religious faiths worldwide each have their own traditions that harken back for hundreds and even thousands of years. In the Jewish faith, for instance, people leave stones. In Latin America, it’s common to leave candles. A tradition that developed from U.S. military culture is the leaving of coins on a headstone.

Please read on to learn more about this fascinating custom and its many interpretations. 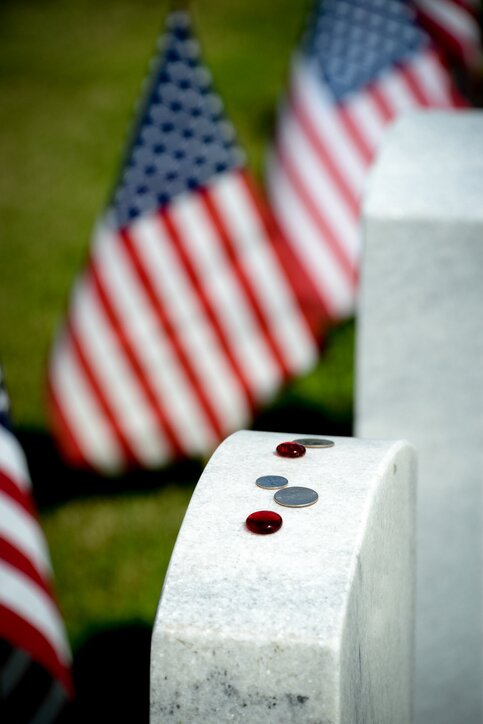 The meaning of coins on a headstone has evolved over time.

In ancient times, coins signified the preparation of departed loved ones for the afterlife. They were a bribe to ensure safe passage to the world of the dead. Over the years, the meaning behind this practice shifted. More recently, coins are left on military graves as a sign that living soldiers have visited the burial site to pay their respects. The practice has expanded and is considered a way for the general public to honor those who died in service to America.

For military members, the tradition is particularly rich and meaningful.

If you have ever visited Arlington National Cemetery, you have probably seen piles of shiny coins placed carefully on the graves of servicemen and women. According to tradition, there is a specific meaning behind each type of coin:

This language of coins allows active servicemen and women to communicate with the families of those who served. It’s essentially a way to pay respects without overstepping boundaries.

What happens to the coins that are left on graves?

The cemeteries, typically military cemeteries, collect the coins for a good purpose. They’re used for cemetery upkeep and to help pay for the burial costs of other veterans. The service people who leave these coins understand they are contributing to these efforts, and it’s one of the reasons the tradition has continued.

For non-military members, coins on a headstone are a symbol of honor.

Primarily, they are a way to pay respects and offer good luck to the departed. Why are coins (pennies in particular) a sign of luck? Ben Franklin might be at the center of this legend because he famously said, “A penny saved is a penny earned.” Because of this famous quote about the importance of personal finance, visitors to his Pennsylvania gravesite developed the tradition of tossing pennies on his grave. Many have adopted this good luck tradition of tossing pennies into the graves of their loved ones. In other cultures outside of the United States, coins on a headstone are a practical solution because they are less expensive than flowers.

Today, people leave coins on a headstone as a sign of enduring respect. They demonstrate that the departed are appreciated and revered long after their passing.

The options are virtually endless when it comes to paying respects to the departed. If you have questions about these time-honored traditions or wish to make funeral arrangements, we are here to help. Please reach out to us anytime.

About Batchelor Brothers Funeral Services: As a leading African American-owned and operated funeral and cremation organization, Batchelor Brothers Funeral Services has provided a ministry of care to thousands of grieving families. We promise to provide our highest level of distinguished service and respect to families who entrust us to honor their loved ones. With two convenient locations serving North and West Philadelphia, it is always our pleasure to be of service. For more information about our funeral, cremation, memorial, repast, and grief counseling services, please visit batchelorbrothers.com.

Please wait No comments have been left yet.
Please wait

During Cold and Flu Season, Follow These Smart Ways to Stay Healthy

When everyone around you is sick, staying healthy can be a challenge. Fortunately, there are steps you can take to protect yourself and your loved ones. The Centers for Disease Control and Prevent...

Coffin or Casket? Six Considerations to Help you Choose the Right Memorial Product

The choice of a coffin or casket should not be taken lightly. While these terms are often used interchangeably, they have some notable differences. Caskets and coffins both serve as burial contain...

Hosting a Reception after the Funeral? Follow These Six Helpful Guidelines

Hosting a reception after the funeral of a loved one presents an opportunity to demonstrate your enduring affection. The funeral reception gives mourners the chance to support each other, share fo...

As stress levels rise, so does the need for self-care. Having effective ways to calm anxiety becomes even more essential amid challenging times. We all feel anxious from time to time. That sense o...

The role of pallbearer or honorary pallbearer is both an honor and a great responsibility. The duties primarily consist of helping to carry or accompany the casket throughout a traditional funeral...

When a death occurs away from home or out of town, knowing what to do can greatly ease the burden for you and your loved ones. Today, people spend significant time away from their homes for vacati...

Cremated ashes take on a new meaning when they are utilized creatively to fashion enduring tributes to loved ones who have passed on. Cremation has become the most popular funeral choice for Ameri...

Transforming ordinary military funerals into highly personalized, meaningful occasions can be deeply healing. When an active-duty service member or veteran passes away, a meaningful final salute i...

Oh, My Aching Back! Seven Healthy Habits that Prevent and Ease Back Pain

You might be surprised to learn that 80% of Americans will experience back pain in their lifetime. Fortunately, simple self-help strategies can be effective at preventing and easing back pain. If...

Leaving a Legacy of Love Starts with These Five Simple Things

People often think that leaving a legacy requires material wealth. That’s an unfortunate misconception. Every day, we leave a personal legacy through the way we live our lives and the impact we ha...